In 1898, the United States became embroiled in the Spanish-American War. President William McKinley, eager to assess the relative strengths of the Spanish forces and Cuban insurgents, wanted to send a message to General Calixto Garcia, who was somewhere in the mountains of eastern Cuba. Col. Arthur Wagner, head of the Bureau of Military Intelligence, recommended a lieutenant named Andrew S. Rowan for the task. Rowan was soon dispatched by ship with the message, and, following a quick, harrowing trip through Jamaica and the eastern end of Cuba, he reached Gen. Garcia with the letter. Rowan returned to Washington with invaluable intelligence disclosed by Garcia that enabled the U.S. to end the conflict in just 10 weeks.

Legend has it that the famed Message to Garcia was scratched onto a leaf of a tree called Clusia rosea. (One would have thought that by 1898 the president of the United States might be writing letters on paper instead of tree leaves, but I digress.) Whether the account is true or not, C. rosea is a very interesting, desirable plant for subtropical gardens. Native to southern Florida, the Bahamas, and into the Caribbean, this relative of mangosteen reaches 25-50 ft. It produces a fairly stout trunk and features a dense canopy of leathery, dark green, paddle-shaped leaves. Messages can, in fact, be written on Clusia leaves; the sap exuded through scraped surfaces is visible for the life of the leaf. That’s why the best-known common name for this plant is Autograph Tree. Another name is Pitch Apple, a reference to the one-time practice of caulking the seams of boats with the resinous black substance found in seed pods.

The 2-3 in. white-to-pink summertime flowers of C. rosea give way to woody pods, or capsules, that split open as they turn brown, revealing black seeds wrapped in soft red flesh. The fruit attracts birds, along with squirrels and other mammals. As an ornamental plant, the Autograph Tree has many appealing attributes—tolerance to drought, saltwater, and variable light conditions, as well as strong resistance to disease and insects. Grown as a tree, there are few maintenance demands, although occasional trimming of aerial roots helps manage size. C. rosea grows at a moderate rate and may be pruned from multiple stems into a single trunk to transform it into a standard. That trait is particularly valuable to its use as a street tree. On the other hand, left as a multi-stemmed shrub, it makes a wonderful screening material, with the following caveat:

We at Richard Lyons’ Nursery believe that the use of C. rosea as a shrub, while very satisfying in the short term, leads to frustration over time. That’s because this species always wants to be a tree. The repetitive pruning necessary to maintain Clusia as a shrub ultimately leads to a woody, unleafy plant. No less an authority than Julia Morton, longtime professor of biology at the University of Miami, weighed in on this matter thirty years ago in the Proceedings of the Florida State Horticultural Society. In an article titled “Pity the Pitch Apple – Treat It as a Spreading Tree,” she contended that “This handsome tree…is a prime example of misuse in Florida landscaping. Where do we see it in South Florida? Usually placed as though it were a shrub in foundation plantings, in pots on terraces, or, if in the ground, in small patios and very close to houses or other buildings….The result, in time, is obvious unsuitability for the location…and increasing ugliness….It’s time for the landscaper and the client to understand the pitch apple and use it wisely and artistically according to its merits.”

With those thoughts in mind, this attractive tree is available at Richard Lyons’ Nursery in 3-gal. containers. We have a quartet of species: C. rosea variegata, whose leaves feature green and yellow marbling; C. lanceolata, with a beautiful small white flower with a red center; C. orthoneura, with a small pinkish red flower; and C. guttifera ‘Nana’, a small-leafed species excellent for bonsai culture.  This name has been around a long time, but this Clusia is probably C. fluminensis ‘Pedra Azul’. 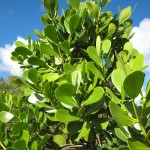 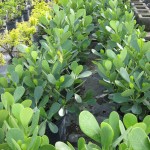 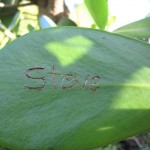 Name on the leaf of an Autograph Tree (Clusia rosea) 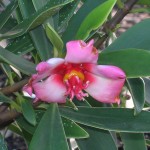 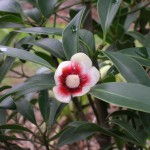 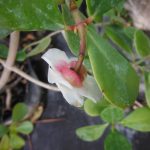 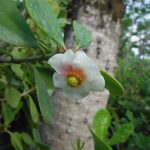 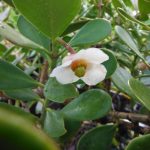