How can a street a mere block long connect Paris and Miami? The idea seems preposterous. Clue: Take a peek into the botanical world.

Victor Jacquemont (1801-1832) was a well-known and well-connected French biologist who has been described as “the most charismatic, tragic, and energetic natural historian of his generation.” During a brief stay in New York, he got into an argument with a former general in the French army over his dislike for Napoleon, who had once imprisoned Jacquemont’s father. The scientist challenged the general to a duel. Alas, duels were illegal in New York State, so he suggested that the challenge be transferred to Haiti, which had no such prohibition. The general ultimately apologized, but Jacquemont still moved on to Haiti, albeit briefly. He returned to New York and did some botanizing in the eastern U.S. and Canada.

Jacquemont liked the democratic institutions of the U.S., as well as its relatively muted class consciousness. However, he detested slavery and presciently predicted that it would lead to civil war. In 1828 he undertook a nine-month journey to India, where he died just a few months after his 31st birthday. For someone so young, he left a prolific body of scientific work, as well as letters, which were later compiled and published. In 1869 a short street in Paris was renamed Rue Jacquemont in his honor.

Jacquemont has been memorialized in the name of a genus of vines – Jacquemontia – which comprises about 80 species. And therein lies the connection between France and Florida.

Jacquemontia pentanthos is a Florida species native to Collier, Miami-Dade, Monroe and (perhaps) Broward Counties. It is considered endangered in Florida, but is apparently abundant in the rest of its large range, which extends into the West Indies, Mexico, Central America and South America.

Known commonly as Skyblue Clustervine, it produces ¾-in. flowers on coiling stems that reach 6-10 ft. in length. Like other members of the Morning Glory family, its flowers open in the morning and close in the afternoon. Its most prolific flowering occurs during the cooler months, when the stems can be covered in hundreds of blooms. It can be grown as a groundcover or on a fence, trellis or other support. The vine attracts both butterflies and bees.  For best results, plant this beautiful species in full sun and moist, well-drained soil. J. pentanthos is also amenable to container culture. To avoid leaf tip burn, do not expose it to salt breezes.

Skyblue Clustervine is available at Richard Lyons’ Nursery in 3-gal. containers. We have recently started growing the white clustervine as well. 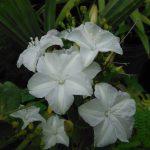 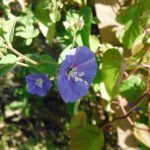 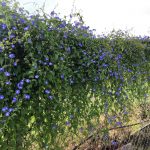