↓
Home Menu ↓
Skip to primary content
Skip to secondary content
Home→Fruit Trees→What’s in a name? Thanks for asking.

From time to time on this website we mention the confusion that can occur from using common names. What happens often is that a single species may have multiple common names, and that condition can develop even in a relatively small geographic area, particularly where mountains or forests historically have limited access by one human population to another.

More rarely, unrelated species have been accorded common names that are so similar that bewilderment reigns. Such is the case with what we call mamey / mammee / mamee sapote / mamey sapote / zapote mamey / mammee apple / mamey amarillo / mamey colorado / zapote rojo / mamey sapote / zapote grande / mamey de Cartagena / zapote de Santo Domingo. These common names – and many more – are found around the Americas, but, perhaps surprisingly, they are attached to just two species. Both are fruit trees, but that is where the similarity ends, because they are members of distinctly different families.

P. sapota possesses a stout trunk and a small number of large scaffold branches that support a spreading crown. While capable of reaching more than 140 ft. in its native range, this species tops out at about 40 ft. in southern Florida. It produces leaves as large as 4 X 8 in. Leaf undersides are light green or brown, and are fuzzy when young. Its small white flowers tend to cluster at the ends of small branches. The thick, woody fruit of P. sapota, covered by a reddish-brown skin, is elongated, measuring as much as 3 X 8 in. The flesh of the fruit, smooth and usually fiberless, varies is colored in a range from dark red through salmon pink and features a distinctive, sweet, almond-like flavor. In addition to being good to eat out of hand, P. sapota is frequently used to flavor ice cream, milkshakes or jellies. 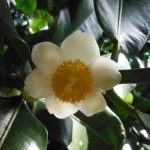 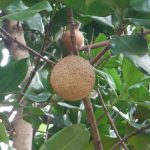 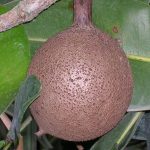 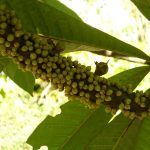 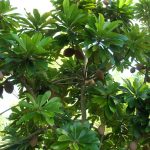 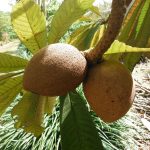 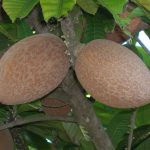