Students of television history know that entertainer Jimmy Durante closed his weekly variety program with the cryptic message, “Good night, Mrs. Calabash, wherever you are.” Theories abounded as to whom, or what, the salutation applied. Durante’s first wife? A restaurant in North Carolina? An old flame?

We at Richard Lyons’ Nursery are sad to report that, despite exhaustive research by our Trivia Department, we don’t have a clue as to the true identity of Mrs. Calabash, but we do know about the Calabash Tree, and we think you should, too.

Known botanically as Crescentia cujete, the Calabash Tree is native to lowland habitats of Central and South America, but has been cultivated around the New World tropics for thousands of years. It is now grown in tropical lands worldwide. Its popularity is owed to a couple of features. First, it is ornamentally interesting. It produces flowers directly on the plant’s stems, a trait known as cauliflory. The gourd-like, nearly round fruits that follow can reach about a foot in diameter. While developing, the fruits are soft and can be coaxed into unusual forms, but eventually they develop a hard, thin shell.

The Calabash Tree grows slowly and may eventually reach 20-30 ft. in our region. It features long, spreading branches that, combined with the plant’s cauliflory, impart a distinctive, easy-recognizable appearance. As an added attraction, the tree’s rough bark makes it ideal for supporting epiphytes, including bromeliads, orchids and ferns.

Another feature accounting for the popularity of C. cujete is its utility to humans. For example, the mature fruits are made into bowls, cups, and rattles, and larger shells tend to be used as storage containers. The tree’s wood is sufficiently dense to be incorporated into tools, stirrups, and vehicle parts, and it has some construction applications.

The calabash also has a role in folk medicine. It is said that various plant parts are processed to treat headaches, colds, pneumonia, intestinal woes, asthma, wounds, and toothaches.

Homeowners will find this species easy to grow. It prefers a sunny exposure and ample water. It is not particular about soil type––the alkaline soils of our region are no challenge––provided that there is good drainage. Richard Lyons’ Nursery grows these trees in 15-gal. containers.

By the way, C. cujete has hermaphroditic flowers, so it is at least conceivable that it could have produced either a Mrs. Calabash or a Mr. Calabash. Durante probably didn’t know that. 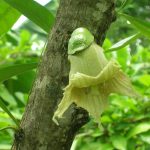