Queen’s Crape Myrtle is a deciduous subtropical tree, USDA hardiness zone 10B-11, closely related to the more cold tolerant Lagerstroemia indica.  However, Queen’s Crape Myrtle has a single trunk,  much larger crown spread, larger leaves, and larger flowers varying in color from pink to purple, as opposed to the many flower colors of L. indica.  It attains a height of 25-30′ in South Florida, with a profusion of blooms from mid-May to June, followed by woody rounded capsules which split open revealing many seeds, which small song birds feed upon.

The common name, ‘Crape or Crepe’, is probably due to the crinkled flowers resembling delicate crepe paper, and ‘myrtle’ because the peeling bark of L indica resembles the trunk of trees in the myrtle family.  The genus Lagerstroemia is named for the Swedish merchant, Magnus von Lagerstrom, who supplied Carolus Linnaeus with plants he collected.

The tree is native to SE Asia, and is called Banaba in the Philippines.  The flowers and leaves are used to make an herbal tea, as they contain corrosolic acid, a chemical which has an insulin like effect of lowering glucose levels in the body.

Richard Lyons’ Nursery has a very large pink flowering variety of Queen’s Crape Myrtle which is much showier than most of the varieties seen in the nursery trade.  Most varieties sold in S. FL. tend to be more purple or lavender than pink, and much smaller sized flowers.  The nursery carries the regular Crape Myrtle in various colors and these trees are grown in 3gal., 7gal., and 15gal. containers. 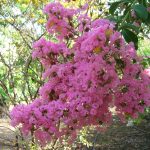 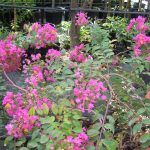 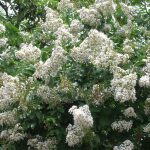 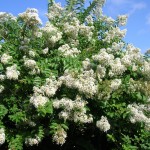