Here is the third installment of our series on fragrant shrubs and trees growing at Richard Lyons’ Nursery.

Buddleja madagascariensis – The Madagascar Butterfly Bush is endemic to its namesake country. It grows informally, usually to about 13 ft., but can exceed that height. However, it can be successfully pinched back, or even cut back hard, to encourage branching and compactness. Young branches, as well as the undersides of leaves, are covered with whitish or yellowish hairs, while upper leaf surfaces are smooth. Clustering small, tubular flowers, colored dark yellow, orange, or salmon, emit a nice fragrance and may appear throughout the year. Fruits mature to a dark purplish hue and attract birds and butterflies.

Duranta erecta – Known until fairly recently as Duranta repens, the Golden Dewdrop is a multi-tasker of a plant; it can often flower and fruit at the same time, producing a remarkable show. The flowers are pale blue to violet, the fruits ripen to a golden-orange color, and often they are on display together. Add to that a delightful scent, and you have the makings of a remarkable ornamental plant. Left alone, the Golden Dewdrop will reach 15-20 ft., but it can also be maintained as a shrub. It is native from Mexico east into the Caribbean and south into South America. Whether it is also native to the southern U.S. is under debate.

Magnolia grandiflora ‘Little Gem’ – Anyone who has ever lived in Dixie knows the Southern Magnolia as a large, showy ornamental tree. For the tip of the Florida peninsula, its cultivar ‘Little Gem’ provides an alternative ideal for smaller yards. It grows slowly into the 20-25 ft. range. ‘Little Gem’ bears the beautiful leathery leaves — glossy green above and bronzy/rusty below — characteristic of the species, but they are not as large. The plant’s fragrant flowering commences early in its life and is heaviest during the spring. This cultivar is amenable to being grown as a shrublike screening material.

Stephanotis floribunda – The Bridal Wreath Vine, endemic to Madagascar, produces star-shaped, tubular, waxy, white flowers that are not only attractive, but also intensely fragrant. Its glossy, dark green leathery leaves occur in pairs along the woody vine. Its long blooming period lasts from summer into fall. For best results, plant in full sun to light shade. Watering should be generous during the summer, but reduced during drier, cooler months in order to mimic native conditions.

Strophanthus gratus – Defying logic, the Climbing Oleander or Rose Allamanda is neither an oleander nor an allamanda, but it is indisputably beautiful. Native to tropical Africa at the margins of humid forests or along the banks of waterways, it can, with support, be grown as a vine, but can also be maintained as a shrub. In winter and spring it produces clustered, showy pink flowers highlighted by burgundy-colored throats and a roselike fragrance. Grow in full sun and provide ample moisture. 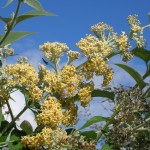 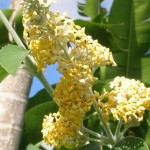 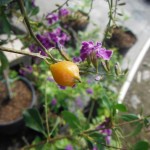 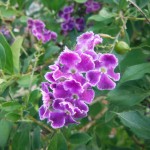 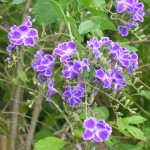 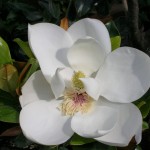 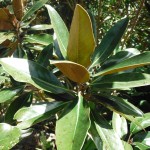 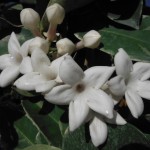 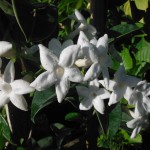 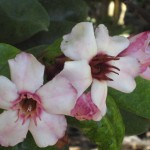