Below is the fourth, and concluding, installment of our survey of palms you should consider planting at the start of the rainy season:

Livistona benthamii is a water-loving species native to Australia and New Guinea. It requires shade when young and light shade when older. As it grows, the brown trunk develops an attractive pattern of knobs where old leaves have separated from the tree. It reaches 25-35 ft. in southern Florida. There have been some reports that it is hardy to as low as 26 degrees.

Pseudophoenix sargentii resembles a small Royal Palm, slowly reaching 10-25 ft., and is thus ideal for compact yards. It produces rich red fruits in abundance, enhancing its attractiveness. The species is native from southern Florida into the Caribbean, Mexico and Belize. It thrives in sun to light shade. It likes moderate watering, but becomes drought-tolerant once established.

Rhapis excelsa, the Lady Palm, has been widely distributed as a popular ornamental for so long that no one is sure where it was native, though China is a good guess. This clumping species thrives in light shade to shade and features slender, fiber-wrapped stems that reach 12-13 ft. in southern Florida. Richard Lyons’ Nursery grows specimens with broad leaf segments and narrow leaf segments.

Sabal mauritiiformis, the Savannah or Bay Leaf Palm, is native to moist settings from southern Mexico to northern South America. In our region, this palmate species reaches 30-50 ft. Unlike most palms that grow trunks, the leaf bases of S. mauritiiformis remain green a long time. It can be grown in light shade when young and then given sunnier exposures when older.

Veitchia arecina is a feather-leafed species that reaches 25-40 ft. in southern Florida, emerging from shade into sun as it grows taller. Native to Vanuatu in the Pacific Ocean, it is rather fast-growing, especially with ample water. Large red fruits add an attractive splash of color to this popular palm.

These palm species are available at Richard Lyons’ Nursery in a variety of container sizes.  We’re open every day of the week but Thursday. 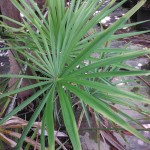 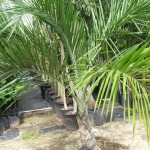 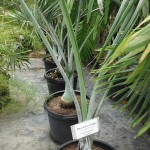 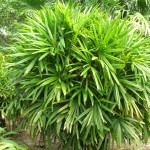 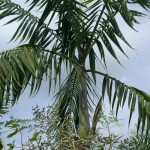 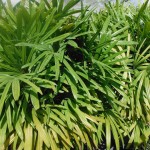 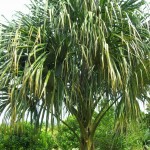 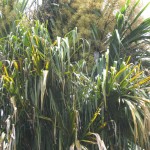 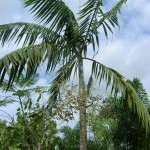