Today Richard Lyons’ Nursery takes a look at the Tamarind Tree. At first glance, Tamarindus indica would seem to be a strange appellation for this wondrous tropical tree. After all, it’s native not to India, but to tropical Africa. So this nomenclatural dysfunction must just be the result of some sloppy botany, right? Well, it’s not as simple as that. Actually the tamarind is a good example of a plant so valuable to humankind that it was long ago distributed to other lands where it naturalized, ultimately coming to be considered native. So strongly did the Tamarind Tree come to being associated with India that when it reached Persia and Arabia, it was called ‘tamar hindi,’ or Indian date. From that erroneous term emerged the name tamarind!

Let’s dig a little deeper into what makes Tamarindus indica so alluring. For starters, it makes a very attractive shade tree. It is characterized by a stocky, short trunk which supports a broad, dome-like crown. In some places around the world, it reaches 80-100 ft. in height, but in southern Florida 50 ft. is more common for mature trees. It has a moderate growth rate. The branches of older trees take on a drooping habit. Of particular value in our area is the high wind resistance of the tamarind’s trunks and branches. The crown is densely foliated with fairly delicate, bright green, pinnate leaflets. Except during the driest of winters, the tree remains evergreen.

Another endearing trait of the tamarind in southern Florida is its ability to tolerate a great variety of soils, both alkaline and acidic, so long as good drainage is provided. Once established, the tree is reasonably drought-tolerant.

Though the Tamarind Tree flowers during the warm season, its blossoms are pale yellow and incon-spicuous. The real show is provided by its fruit pods, velvety structures about 6 in. long that are colored cinnamon brown or gray-brown. The pods are commonly fed to livestock, but because the raw fruit is both sweet and very acidic, humans enjoy it best once it is processed. Cooked pods – from immature to fully ripe – have very significant uses in tropical cuisine. The pulp surrounding the seeds has a major role in the preparation of various curries and chutneys, as well as certain brands of Worcestershire sauce. In both the Old World and New World, a beverage – tamarind ade – has long been made from the fruit. In more recent times it has been concocted as a carbonated drink. The pulp is also made into jelly, jam, ice cream and sherbet. Tamarind syrup is a popular product in Puerto Rico.

Tamarindus indica is also valuable medicinally. The pulp has a number of applications, including as a liniment, an anti-inflammatory, a digestive aid, and a sore throat gargle. Likewise, leaves, flowers, roots, bark and seeds have been incorporated into various remedies.

The dense, insect-resistant wood of the tamarind, despite being hard to work, is popular in the manu-facture of furniture, paneling, gears, tool handles, and boat planking.

With all its excellent characteristics, the tamarind is as close to bullet-proof for our region as any tree we grow. When you visit the nursery, you’ll find this remarkable plant in 1-, 3- and 15-gal. pots. 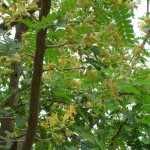 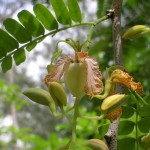 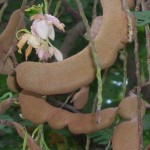 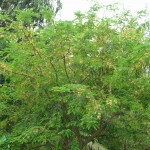