Often––especially while stuck in snail-paced traffic on a hot, muggy day––we forget some of the unique benefits of living in southern Florida. One of them is the ability to grow a very large variety of tropical fruit species in our yards. Confined to a fairly small patch of land at the bottom of a peninsula, and benefiting from the proximity of the Gulf Stream, we can enjoy fruits that most folks in the rest of the continental United States have scarcely heard of. Over the next few weeks this space will be devoted to surveying some of the popular tropical fruit shrubs and trees that have been successfully introduced to our corner of the country.

The Jujube tree is a fruit tree in the Rhamnaceae, or Buckthorn Family, that grows very well in southern Florida. Its origin is southern Asia and for 4,000 years it has been cultivated in China, where there are 400 known varieties. It can attain a height of 20 ft. and a width of 12 ft., and features shiny green foliage. It bears small oval fruits from late November through January. The fruit, eaten fresh while still smooth and green, has the consistency and taste of an apple. It later matures to a purplish-black coloration. It is at this stage that fruits are dried and become chewy, with a date-like consistency, giving them the common name Red Dates. This species is extremely cold tolerant, surviving temperatures down to about 5º F.

Jujubes were first introduced into the United States in the late 1800s, but quickly fell out of favor due to the fact that the variety introduced was best suited for drying and not for eating fresh. It wasn’t until the 1990s that growers introduced a variety cultivated for consuming right off the tree. Most recently, in 2007, two more varieties were introduced for fresh fruit. It is unclear which cultivars are being sold in the nursery trade today; however, it is known that the following named cultivars are the best for eating fresh: ‘Sugar Cane’, ‘Li’, ‘Sherwood’, ‘Chico’, and ‘Honey Jar’. Of those, ‘Honey Jar’ is the smallest and juiciest. ‘Lang’ and ‘Shanxi Li’ are best for drying and eating like dates. One thing is clear, though: Each tiny fruit has 20 times more vitamin C than does citrus. 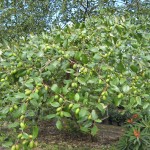 Originally native to Polynesia and Melanesia, this species’ popularity has led to its distribution throughout the tropics. It was introduced to Jamaica in 1782, and started to be grown more widely there years later when Captain Bligh brought plants from Hawaii. In 1909 a source in Liberia sent seed to the USDA, but it did not catch on as a money crop in the US, possibly because its cold tolerance is just a few degrees below freezing.

The June plum, also known as amberella and a host of other common names, is fairly fast-growing, maturing to the 30-40 ft. range in southern Florida. Its hard green fruit often falls off the tree and ripens to a yellow-golden color on the ground. Eaten raw, June Plum fruits are crunchy, possessed of a pineapple-mango flavor with a bit of tartness. As they get further along in ripeness, they become softer. The fruit’s versatility has led to its being incorporated into a number of food dishes around the world. It is, for instance, made into jams and preserves and used to flavor stews, sauces and soups. It may be eaten with a shrimp paste or combined with chiles and other spices into a snack food. Elsewhere, the fruit is made into a drink in the company of ginger and sugar. It is also used in curries and, when dried, rendered into a spicy chutney.

This interesting species can grow in alkaline or acidic soils and, so long as a sunny exposure and good drainage are provided, is not demanding. Finally, don’t let the name June Plum mislead you; the species fruits almost all year. 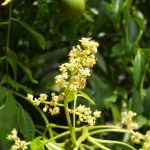 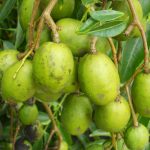 One of the most reliable plants in southern and central Florida for creating a dense and uniform hedge is Eugenia uniflora, better known as Surinam Cherry. Few other plants stay full from bottom to top as they increase in size and age. Although native from northern South America to southern Brazil, Surinam Cherry was first described botanically from a specimen found in a garden in Pisa, Italy. That plant was thought to have been introduced to Italy from Goa, the tiny, but historically important, state on the western coast of India. It is thought that Portuguese travelers carried seed of E. uniflora from Brazil to Goa, just as they did cashew over 450 years ago. Since that time, Surinam Cherry has been widely distributed in the tropics worldwide and even into the subtropics.

Surinam Cherry in Florida flowers in early spring and develops attractive ribbed fruits about an inch in diameter that ripen from bright red to deep scarlet to purple-maroon. As a hedge, it tends to be pruned so often that most of its fruit production is lost through the removal of flowers, but as a stand-alone small tree, it is an excellent source of food for wildlife as well as for humans. However, since the fruit of the most popular cultivar here is tart to the human sense of taste unless it is fully ripe, it is probably more desirable when used in jams, jellies, pies or wines. 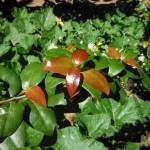 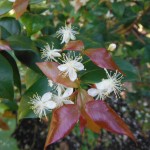 The persimmon (Diospyros kaki), Chinese in origin, is a wonderful fruit which unfortunately has had a reputation for doing poorly in southern Florida. Most of us think of persimmon as a California crop. After all, it was introduced there in the mid-19th century. However, its popularity has led to the creation of more than 2,000 cultivars, and Richard Lyons’ Nursery has come upon a hybrid that succeeds in our area.

Fittingly named Triumph, this very tasty cultivar will now allow growers in southern Florida to harvest a fruit––sometimes sold under the name Sharon––that is low in fats, high in dietary fiber, and possessed of anti-oxidant, anti-inflammatory and anti-hemorrhagic properties.

Persimmon trees are also ornamentally appealing, growing to a moderate size and featuring glossy green leaves. When laden with fruit, they are particularly eye-catching. Triumph bears a tomato-shaped fruit that should be picked when mature––that is, fully-colored but still hard. Left to soften on the tree, the fruit will begin to attract hungry wildlife. The best practice is to leave picked fruit out at room temperature until it softens and its astringency has disappeared. Triumph grows at a very deliberate rate and will not overwhelm even small yards.

Jaboticaba, a native of South America, was introduced to Florida just over 100 years ago, reportedly in Brevard County. It grows very slowly and, in the shallow soils of southern Florida, rarely exceeds 15 ft. (The slow growth rate also makes Jaboticaba popular as a bonsai subject.) While the tree prefers mildly acidic soils, it adapts fairly well to alkaline sites, especially when good nutrition is provided. For best fruiting, trees should be grown in full sun, and the soil at the planting site should be well-aerated and well-drained.

Although a young Jaboticaba may not begin to bloom for eight years, given appropriate moisture and fertilization it will eventually flower and fruit several times a year. The flowers are small and white, and the leathery skin of Jaboticaba fruit ripens in a range of color from purplish-maroon to almost black. The period from flowering to fruit harvest is encouragingly short––20-30 days. The fruit, which ripens to an inch or so in diameter, has a grapelike appearance, but contains just 1-4 large seeds. The gelatinous flesh is white to pink, and its flavor ranges from sweet to sub acid.  Since the fruit has a fairly short shelf life, it is usually eaten fresh, but is also used to make jams, jellies, pies, and alcoholic beverages. 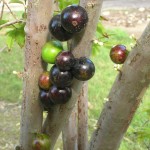 Fruit growing on the Trunk

Richard Lyons’ Nursery currently has all of these plants in stock.