This week we continue with our look at some of the edible plant species available at Richard Lyons’ Nursery. Part II concentrates on shrub and tree species.

Jujube (Zizyphus jujuba): The Jujube tree is a fruit tree in the Rhamnaceae, or Buckthorn, Family, that grows very well in southern Florida. Its origin is southern Asia, and for 4,000 years it has been cultivated in China, where there are 400 known varieties. It can attain a height of 20 ft. and a width of 12 ft., and it features shiny green foliage. It bears small oval fruits from late November through January The fruit, eaten fresh while still smooth and green, has the consistency and taste of an apple. It later matures to a purplish-black coloration. It is at this stage that the fruits are dried and become chewy, with a date-like consistency, giving them the common name Red Dates. This species is extremely cold-tolerant, surviving temperatures downs to about 5° F.

In China, its products include jujube tea, as well as juice and a vinegar used to make pickles. A wine is also made from the fruit. Chinese medicine uses the fruit to kill internal parasites, promote liver function, and improve the pulmonary system. In Iranian cuisine, the dried fruits are eaten as a snack.

Jujubes were first introduced into the United States in the late 1800s, but quickly fell out of favor due to the fact that the variety introduced was best suited for drying and not eating fresh. It wasn’t until the 1990s that growers introduced a variety cultivated for eating fresh off the tree. Most recently, in 2007, two more varieties were introduced for fresh fruit. It is unclear which cultivars are being sold in the nursery trade today; however, it is known that the following named cultivars are the best for consuming fresh: ‘Sugar Cane’, ‘Li’, ‘Sherwood’, ‘Chico’, and ‘Honey Jar’ Of those, ‘Honey Jar’ is the smallest and juiciest. ‘Lang’ and ‘Shanxi Li’ are best for drying and eating like dates. One thing is clear, though: Each tiny fruit has 20 times more vitamin C than does citrus. 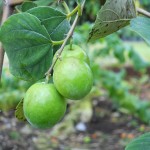 Jackfruit (Artocarpus heterophyllus): We’ve all heard about 1,600-lb. pumpkins and 270-lb. watermelons. Those are impressive weights, and fortunately the fruits had the ground to support them as they increased in size. But do you know the largest fruit that grows on a tree? It’s the jackfruit (or jakfruit), and not only is it big, but it’s also very tasty – and versatile. Let’s take a brief look at what makes this odd-looking food so popular around the tropics.

The jackfruit tree is native to India, but is now cultivated in other parts of the world. In its homeland, a mature specimen may reach 80 ft. in height, but in southern Florida, 40 ft. is more the norm, and, through selective pruning, a homeowner can maintain the tree at 10-12 ft. without seriously disturbing fruiting. This species’ large fruit is supported by the biological mechanism known as cauliflory, meaning that the fruit develops on the trunk and major branches, which are capable of bearing great weight. The fruits are known as syncarps; like pineapples, raspberries and mulberries, they consist of multiple individual flowers and their resulting fruitlets fused into a compound fruit.

In subtropical southern Florida, jackfruit has proven to be quite dependable, usually flowering on an annual basis, generally from May to October. The best way to tell if an individual fruit is ready to eat is to pick it up as soon as it drops from the tree. Of course, that practice has its risks if you happen to be standing in the wrong place when it falls. The second-best way to detect a ripe jackfruit is the sniff test to see if you can discern a sweet aroma featuring notes of bananas and pineapples. But it’s not just ripe jackfruits that attract fans; many Southeast Asian recipes use green fruit. As further testimony to the jackfruit’s versatility, it can be eaten fresh, cooked, frozen or dehydrated. 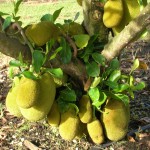 Star Fruit (Averrhoa carambola): Here is yet another plant whose longtime popularity around the tropics has obscured its original range, considered to be somewhere in Asia. Introduced into Florida more than a century ago, it is now grown commercially in Miami-Dade, Broward, Palm Beach, and Lee counties. Mature trees in our region reach 22-33 ft. in height, and may be single- or multi-trunked. Carambola produces beautiful lavender to pink flowers, although they are small.

Not only is the waxy-skinned, fiberless fruit visually interesting – usually a five-pointed star in cross-section – but it’s also tasty. Although the earliest introductions were quite tart, hybridization has led to cultivars that possess a subacid to sweet flavor. Optimal flavor is achieved when the fruit is allowed to ripen on the tree. Mature Star Fruit is a pale yellow, sometimes with green highlights. The fruit is not only popular eaten out of hand, but is also used in cooking.  Star Fruit is nutritionally very desirable: It is low in sugar and sodium and high in Vitamin C, potassium and antioxidants.

Carambola performs best in full sun, but can also produce fruit when lightly shaded. For optimum performance, it should not be planted in windy locations. It is a water-loving species and can even stand occasional flooding, but should nevertheless be planted on a site that drains well. It prefers soils with neutral to acidic pH, but does well in the alkaline soils of southern Florida if grown under a conscientious nutrition program. Good palm special fertilizers are helpful in this regard, because their formulations will contain desirable micronutrients. 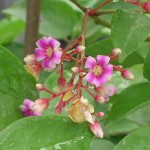 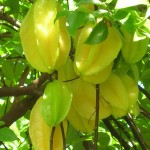 Averrhoa carambola (Starfruit) on the tree

Star Apple (Chrysophyllum cainito): Inroduced to Florida around 1887, this beautiful tree, native to the West Indies and Greater Antilles, produces smooth-skinned fruits 2-3 in. in diameter that have achieved popularity as far away as Southeast Asia and throughout tropical lands in between. The sweet fruit is usually eaten fresh and is favored as a chilled dessert.

Fruit ripeness is indicated by a bit of softening and the dulling of skin color. Mature fruit must be cut from the tree; it does not drop on its own. The rind and skin of Star Apple fruit are not edible due to their latex content. When cutting the fruit open, care should be taken to keep the latex from dripping onto the flesh.

Where Cainito is native, it can become quite tall, but in southern Florida it is most often seen maturing to 25-35 ft. It features a broad, dense crown. Even if it were not a fruit tree, it would be a very desirable ornamental plant because of its foliage. Leaves are dark, glossy green on the upper surface and fuzzy golden-brown on the lower surface.

Star Apple thrives when grown in full sun. The planting site should have excellent drainage, but the tree is not otherwise particular about soil type. 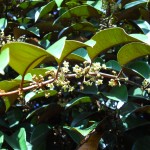 Sugar Apple (Annona squamosa): This species is the most widely cultivated of the Annonaceae, due mostly to its ease of growth in coastal lowland climates. The plant is short, falling into the category of shrub or small tree, and it is well-branched, with light brown bark. Its origin is Tropical America, but it has long been distributed throughout the Old World and New World tropics.

The fruit of A. squamosa is quite distinctive. Generally oblong and measuring 2½-4 in. in length, its rind is composed of thick, knobby segments. None of the other 2,200 or so Annona species features such a fruit. As it ripens, the segments tend to separate. The pale-colored flesh of Sugar Apple fruit is creamy, fragrant, and sweet, and it contains significant levels of vitamin C.

A. squamosa adapts well to rocky soils, but prefers sandy loams. It holds up well to heat and possesses a degree of drought tolerance, but for best production it should receive supplemental watering during the growing season. Plant in a sunny location on a site with no drainage problems. 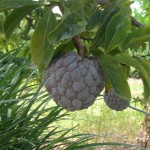 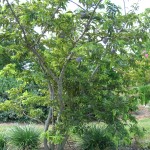 Custard Apple (Annona reticulata): This is another species thought to have originated in Tropical America, though long-since distributed throughout the tropics. It has an upright form with spreading crown and matures in the range of 25-33 ft. However, it is amenable to pruning to develop a preferred height and form. Fruit shape is quite variable, as is size – from just under 3 in. to about 5 in.

Custard Apple fruit has some variability, but the cultivar grown by Richard Lyons’ Nursery is sweet-tasting.

A. reticulata is not as drought-resistant as A. squamosa. However, it is somewhat more cold-tolerant, capable of surviving temperatures in the upper 20s and perhaps a couple of degrees lower as it matures. For best production, this species should be planted in full sun and well-drained soil. It appreciates ample watering, but does not react well to inundation. 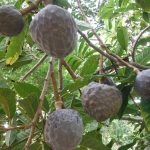 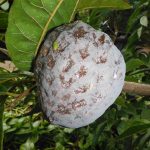 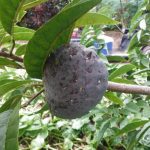 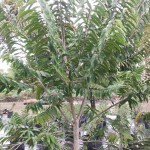