We at Richard Lyons’ Nursery are very observant folks, and we’ve noticed over time that people seem to love to eat. But folks don’t always choose wisely, in spite of all the salubrious foods available. Accordingly, we’d like to make some recommendations of wholesome and tasty vegetables and fruits available from our farm. Hint: There are enough of them to warrant a second installment next week. This week we report on plants specifically selected for their ability to withstand the long, hot, rainy summers of southern Florida.

Garlic Chives (Allium tuberosum): Also known as Kow-choi or Chinese Chives, this onion relative is a very desirable plant for the summer garden. It excels as a flavoring agent for those who like a mild version of garlic; its delicate taste can be detected in many Asian dishes. Both leaves and flowers can be used as seasoning. But Garlic Chives also make a nice ornamental contribution to the herb garden, whether in small groups or as a ground cover. The 2″ x 2″ plants look like neither garlic nor onions, but instead feature flat, broad leaves. At flowering time, fragrant white blooms appear on stalks projecting above the leaves. 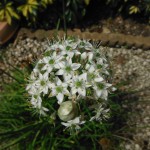 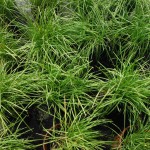 Oregano (Origanum vulgare): Oregano, an herbaceous perennial native to warmer regions from Europe to Asia, is a member of the mint family and is closely related to sweet marjorum. It can reach over 32″ high, but usually stays under 20″ and spreads by rhizomes. The dark green, oval leaves of Oregano are aromatic and tasty. They can be cooked fresh or dried for longer-term use. The plant produces white to pink to purple edible flowers on upright stalks, but the leaves taste best when harvested just before bloom time. The multiple cultivars of Oregano possess distinct tastes. 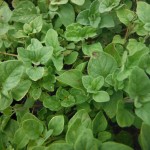 Parsley (Petroselinum crispum): Parsley, a biennial aromatic plant native to both the African and European sides of the Mediterranean, has many culinary roles: herb, spice, vegetable. It is also a  host plant for the Black Swallowtail Butterfly. It generally grows in clumps about a foot tall by a foot or more wide. Parsley’s bright green triangular leaves are finely divided into flat or curly leaflets which are harvestable even in climates where wintertime nights hit the low-20s. One of the three varieties of parsley produces edible roots. It is also popular as an ornamental plant in gardens, where it can be incorporated in window boxes or used in the ground as an edging material. 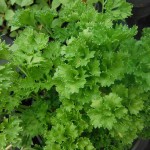 Rue (Ruta graveolens): Like most people, you probably find yourself in need of a witch-repellent from time to time. Meet Ruta graveolens. From the Middle Ages on, this native of southern Europe was valued as an essential tool in the struggle against witches, so it was integrated into many spells — perhaps even by the Wizard of Id. In more recent times, Rue has been used both to flavor foods and to add fragrance to cosmetics and soaps, and it also has many medicinal applications. Ironically, its bluish leaves, while still on the shrub, emit an unpleasant odor, so it’s best to locate this hardy plant at some distance from your house. Rue also happens to be in the Rutaceae Family, or as most would know it, the Citrus Family.  As you may know, all Citrus Family members are host to the Giant Swallowtail Butterfly, and Rue is no exception despite its pungent aroma. 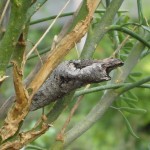 Rosemary (Rosmarinus officinalis): Here’s one of many herbs belonging to the mint family. Rosemary is a woody perennial plant that matures to about 6″ high and 4-5″ wide. It is at home in poor, dry soils. Native to Mediterranean lands, it produces strongly fragrant, needle-like leaves and semi-tubular flowers that vary from white to pink to purple to blue. Its astringent leaves are particularly popular when cooked with fatty foods, but are also often used to dress roasts. Rosemary is also said to enhance memory, a quality which may help you remember that you can prune it following flowering to encourage denser growth. 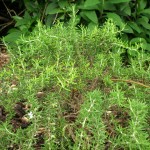 Thyme (Thymus vulgaris): A representative of the mint family, Thyme is a bushy, woody evergreen shrub native to southern Europe. It grows 6-12″ high and about 16″ wide and features highly-aromatic, small, gray-green leaves. Its semi-tubular flowers are pink to pale purple. Thyme favors full-sun exposures and easily tolerates dry, rocky, shallow soils. The leaves are most aromatic just before bloom time, and can be used fresh or dried to complement the flavor of meat and fish dishes, sauces, soups and stews. Thyme also has many cultivars created for its use as an ornamental plant in the garden or in pots indoors. 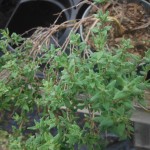 Tarragon (Artemisis dracunculus var. sativa): The aromatic leaves of this subspecies of Artemisia are cultivated for use as a culinary herb. The plant comes in many forms, each imparting a specific flavor. It is native from the Caspian Sea area to central and eastern Europe, including Siberia! Tarragon matures up to 5″ high, but usually shorter, and spreads by rhizomes. Flowers are yellow-green, but the plant does not always produce blooms. Its lanceolate, i.e., narrow and pointed, glossy leaves are used fresh or dried to flavor vegetables, meats, fish, sauces and eggs. Tarragon prefers well-drained soils. Most of the Tarragon sold in South Florida is Tagetes lucida or Mexican Tarragon. 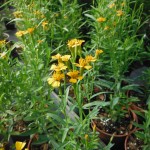 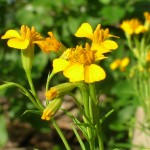 Lemon Grass (Cymbopogon citratus): Though commonly known as West Indian Lemon Grass, this popular herb is native to maritime Southeast Asia. It grows in dense clumps capable of reaching 6′ high and about 4′ wide. Its blue-green strappy leaves, which droop gracefully at the tips, emit a citrusy aroma when crushed. The leaves are also used widely — either fresh or dried and powdered — to flavor curries, teas and soups, as well as meat and seafood dishes. Lemon Grass oil contains a number of useful compounds, including the mosquito repellent, citronella. Plant this year-round herb in bright light in moist soil. Butterfly Pea (Clitoria ternatea): This native Asian vine isn’t just a food source, but also an ornamental plant, featuring deep blue flowers with yellow markings. The peas are edible while in an early stage of development, when still tender. The elliptical flowers – just under 2 in. long – are used to make a caffeine-free tea and are also a source of food coloring. Although this sun-loving plant is reasonably drought-tolerant, it performs best when placed in a well-drained site and watered regularly. An additional benefit of Butterfly Pea is that it is a nitrogen-fixing plant. 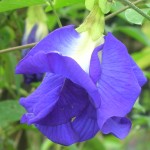 Cuban Oregano (Plectranthus amboinicus): We end Part I with an herb that’s become so popular, for so many centuries, that it has multiple – and even conflicting – names. For instance, in India it’s known as Indian borage. In Cuba it’s called French thyme. In parts of the U.S., it’s known as Spanish thyme. Well, the species is not thyme, and it’s not from India, Cuba, or France! P. amboinicus is most likely native to eastern and southern Africa. What is certain is that it is an oregano-like member of the Lamiaceae (or mint) family. It produces a fleshy stem and fleshy, fuzzy oval leaves about 2½ in. long. It matures to just over 3 ft. tall. In addition to its use as a spice, Cuban Oregano is reputed to have medicinal properties capable of remediating respiratory, arthritic, and digestive problems. Chewing a leaf of this plant is said to ease the burning sensation of highly-spiced foods. 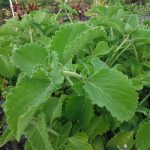