One of the most vexing problems for gardeners everywhere is how to deal with the areas of their property in which there is not enough light for turfgrass to grow.  In the southern U.S., St. Augustine grass outperforms other turfgrasses in terms of shade tolerance, but eventually it, too, becomes sparse as lighting decreases.  Rather than put up with bare patches of soil, Richard Lyons’ Nursery recommends that homeowners plant a shade-tolerant ground cover.  Among the best of them is Giant Liriope (Liriope gigantea).

Also known as Giant Lilyturf, L. gigantea features dark green grasslike leaves that grow in clumps ultimately reaching 3 ft. x 3 ft.  The leaves recurve, giving each clump a rounded appearance.  Consequently, the manner in which you lay out containers of Giant Liriope allows you to achieve varying effects.  To create a continuous ground cover, install containers a foot or less apart, but to emphasize the mounding habit of the species, increase the spacing.  L. gigantea also functions very successfully to create a border between one element of the landscape and another, and its versatility allows it to handle the transition from shady to sunny settings.

Giant Liriope is not only attractive, but easy to grow.  It is undemanding with respect to soil types, and, once established, can survive dry periods with no more than weekly irrigation.  About the only condition to avoid in installing this valuable ground cover is poorly-drained areas of the yard.

Like Liriope, Ophiopogon japonicus (Mondo Grass) is a member of the Liliaceae (Lily) Family, despite its appearance and common name.  It is much smaller than Liriope, but its growing requirements are essentially the same.  Mondo Grass is native to shady forests of Japan and Korea, while Liriope extends into China.

Richard Lyons Nursery currently has both of these plants in stock. 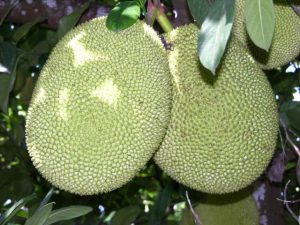 Artocarpus heterophyllus (Jackfruit) on the tree.

I know some of you have been waiting since last season ended. The wait is finally over. The jackfruit is back, and we have a beautiful fruit this year.

If you aren’t familiar with jackfruit, this is a tropical treasure. It has a unique flavor somewhere between banana and pineapple mixed with other tropical notes of flavor. The spiny fruits are spectacular in size and can get upwards of 70 pounds.

For a really unique experience, come by Richard Lyons Nursery in Miami today and buy some jackfruit for a taste of this Asian treasure.

There are many species of gingers in the nursery trade, but none more spectacular than the Torch Ginger. Botanical name, Etlingera elatior, the foliage is dark green with large wide leaves and canes that reach 6-9 feet. The flowers emerge from separate stalks and reach 3-4 feet in height and resemble a torch. Pink or pinkish red is the most common color. However, there is a pure white which is equally spectacular.

Richard Lyons Nursery has both colors in stock.

There are many species in the Genus Costus. These are commonly referred to as New World Gingers, Spiral Gingers, Crepe Gingers, Button Gingers, and even Step Ladder Gingers. They aren’t related to the Old World Gingers of which a few species give us the edible ginger root which we use in cooking. They do give a great tropical look and the flowers do attract butterflies and hummingbirds. Whatever you call them, if you just ask for Costus, most people will know what you are looking for.