↓
Home Menu ↓
Skip to primary content
Skip to secondary content
Home - Page 53 << 1 2 … 51 52 53 54 55 … 71 72 >>
Did you know that the flowers of Bougainvillea are small and inconspicuous?  That’s because the features that produce the spectacular colors found in this genus are actually bracts, modified leaves located at the point from which flowers develop.  Thus bracts are an integral part of the flowering process, though they are not flowers themselves.
Did you know that the first woman to circumnavigate the earth was also possibly the first European to discover Bougainvillea?  It is reported in some accounts that in 1766 Jeanne Baré (or Baret) was snuck aboard a ship of exploration by her botanist boyfriend, Philibert Commerçon.  In order to flout ship rules, she was disguised as a man.  We at Richard Lyons’ Nursery try to maintain a high degree of dignity and civility, so we shall not comment further about this aspect of the three-year expedition except to say that advances were made . . . in the name of science.
The spiny woody vine discovered not long after reaching Rio de Janeiro in 1767 was not described botanically until 1789, when it was named for Louis Antoine de Bougainville, the French admiral and explorer who had commanded the voyage.  The genus Bougainvillea is native to Peru, Brazil and southern Argentina.  There is still some uncertainty about the total number of species; depending on the source consulted, there are somewhere between four and 18.  What is certain is that the 1930s ushered in an active period of natural and intentional hybridization, and we are now flush with a whole panoply of bright colors.  There are over 300 cultivars (cultivated varieties) of Bougainvillea!
Bougainvillea produces sprawling, arching branches, but can be trained to grow as a standard.  Often used in the ground as an impenetrable screening material, it can also be grown in containers or hanging baskets, where pruning following bloom will keep the plant compact and encourage side-branching.  And as a container specimen, Bougainvillea is particularly amenable to thriving on high-rise balconies, because it is highly-resistant to winds.  Although not extremely cold-hardy, the genus can stand enough frost to be widely grown as an ornamental in southern Switzerland near the foot of the Alps.
The best color production occurs in full sun.   The genus is very salt-tolerant, so coastal exposures are no problem.  Bougainvillea is also quite drought-tolerant, and once a plant installed in the ground becomes acclimated, it will require little supplemental watering.  In fact, the rainy and very hot summers of southern Florida inhibit color displays, so in our region Bougainvillea flourishes best during the dry season.  It responds well to light applications of fertilizers, but use of a high-nitrogen formula will produce rampant vegetative growth without much color.  A balanced formula is a better bet, and some experts recommend fertilizers formulated for roses or other flowering plants.
The cultivar ‘Pixie’ deserves special mention.  Not only is it almost thornless, but it also produces color later into the summer than many other cultivars.
Richard Lyons’ Nursery offers Bougainvillea in shrub form in 3- and 15-gal. containers and as standards in 7- and 15-gal. sizes.

After an abnormally-warm fall and early winter, southern Florida finally experienced some significant cold fronts in January.  For most locations in the region, the coldest readings were recorded on Sunday, January 18, when widely-scattered frost was reported.  While chilly weather can prompt flowering in some fruit species, we remain pessimistic that lychees will produce significant quantities this year.  And we have yet to observe the kind of flowering in mangos that we hoped the low temperatures would trigger.

But, as we know, cold weather more often has a dark side.  While vegetable and fruit crops were spared significant damage this month, that does not mean that tropical ornamental plants uniformly fared so well.  Even where temperatures fell no lower than the upper 30s, a number of species suffered damage that merits monitoring and perhaps some treatment.  Here are a few suggestions:

Don’t be in a hurry to remove leaves affected by the cold temperatures and high winds.  They will provide an extra measure of protection if there is another outbreak of winter weather.  Remove the brown leaves when temperatures become reliably warmer and new growth can be observed.

Don’t assume that your plant came through unscathed just because it exhibits no outward signs of damage.  Palms in particular may look fine even though they have suffered internal damage to the bud that may lead to the plant’s death months later.  To be on the safe side if you own a species known to be cold-sensitive, pour or spray a fungicide (diluted according to label instructions) directly into the bud at the spot where new leaves emerge, and administer a second dose 7-10 days later.  Alternatively, you may apply 3% Hydrogen peroxide, a bacteriacide, into the bud.  But avoid the temptation to treat your palm with both types of chemicals; they are not compatible.

Maintain standard watering habits.  Ample rainfall the last week of the January relieved homeowners of the need for supplemental water, but you should stay alert for the sudden onset of dry weather that requires intervention on your part.

Perhaps the best known butterfly in North America is the Monarch Butterfly (Danaus plexippus).  South Florida is very lucky this time of year, and not just for our mild climate.  While most of the United States is in the middle of a frigid winter, with its Monarch Butterfly population safely hibernating in the Oyamel Fir trees of Central Mexico and Eucalyptus trees in Southern California, our population is flying about and reproducing.  You see, since we have food and warmth for them year round, there is no need for our population to migrate to Mexico.

The Monarch Butterfly feeds on nectar of almost every flower, but it will only lay its eggs on plants in the Milkweed Family (Asclepiadaceae), and in our area, the Mexican Milkweed (Asclepias curassivica) is by far preferred over any other Milkweed relative.  Once the eggs are laid, they hatch into caterpillars in 10 days.  A chemical compound in the milkweed plant makes the caterpillar, and later the adult butterfly, very distasteful to potential predators such as birds and lizards.  The caterpillars continue to feed for 2 weeks.  Then the mature caterpillar leaves its host milkweed plant and encases itself in a chrysalis on a nearby shrub or sometimes a pot, or even under a windowsill.  After 10 days, a beautiful Monarch Butterfly will emerge feeding on nectar for 2-6 weeks, before looking for a mate to start the process all over again.  Male Monarchs have a black spot on each of their hind wings over a vein.  The female is identical to the male in every aspect, except for these 2 black spots.

Now the only difference between the population in S.FL. and the rest of North America, is that in September and early October, the butterflies that emerge from their chrysalis migrate approximately 2,500 miles (depending on their location) to Central Mexico where they hibernate in Oyamel Fir Trees for the winter.  They can fly 50-100 miles per day, so depending on where they begin their migration, it can take 30-60 days to complete the journey.  These late season butterflies live for 6-8 months, whereas butterflies metamorphosing during the rest of the year only live for 2-6 weeks, similar to the population in S.FL.  Then, starting in March, they start migrating north breeding and finding milkweed plants to lay their eggs on along the way. 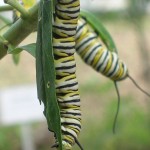 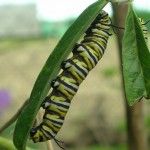 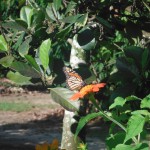 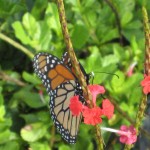 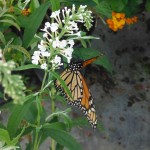 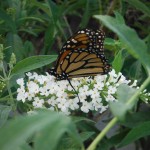 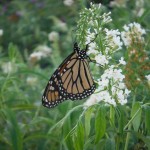 If one word had to be picked to describe the current status of vegetable and fruit crops in southern Florida, it would be “confused.”  That’s because weather conditions over past few months have caused many crops to develop erratically.  Forecast projections for the period from November through January went wrong immediately:  November was predicted to be cooler than normal, but, in fact, readings below 60 degrees were recorded just once the entire month.  Rainfall was seasonally scant until the last 10 days of the month, when a series of showers began drenching the area.  December has been warmer than average almost every day.

Several anomalies have appeared as a result of the warm weather.  Some plants have benefitted from the abnormally high temperatures.  For example, the fruiting season for jackfruit should have ended in October; instead, the trees are continuing to bear.  The idea that jackfruit will be ripening sometime during mid-winter is almost unheard of.  On the other hand, development of large-fruited varieties of tomato was delayed by the heat.  The big tomatoes generally set fruit best when nighttime temperatures are in the 60s.  In November, low readings in the farming area near Miami were 70 degrees or higher on some 21 nights; the average low for the month is 64 degrees.  Consequently, fruit set on tomatoes has been inhibited.

While tomato production has only been slowed, a far more ominous fate is likely for lychees, which need cool weather to trigger flowering.  Because of the paucity of significant cold fronts capable of dropping minimum temperatures below 55 degrees, most lychee trees will not produce significant crops in 2014.  And so far, for the same reason, as well as the late-November rainfall, early-bearing varieties of mango have not begun to flower.

Fortunately for Richard Lyons’ Nursery and its customers, lots of crops are ready!  Plan to take a drive out to the farm, and you will find ripe collard greens, Swiss chard, green beans, romaine lettuce, daikon radish, cilantro, Malabar spinach, jujube, carambola, avocado, and cherry tomatoes.  These versatile crops can make your holiday meal plans varied and delicious.

Your earliest New Year’s resolution for 2014 should be to become more familiar with IFAS, The Institute of Food and Agricultural Sciences.  IFAS is a partnership of federal, state and county agencies charged with generating knowledge in several key areas — agriculture, the life sciences, and human and natural resources — and making that information accessible to the public.

IFAS is part of the great tradition of nationwide cooperative extension whose antecedents date back before 1850, when agricultural societies in many states in the eastern U.S. began to conduct public lectures on agricultural topics.  The big boost to this movement occurred in 1914, when Congress passed the Smith-Lever Act creating the Cooperative Extension Service as a partnership between land grant colleges and the U.S. Department of Agriculture, and authorized an appropriation to the states for work in agriculture and home economics.

The State of Florida refined its role by creating IFAS in 1964.  Now IFAS has offices in all 67 counties of Florida, and operates 12 Research and Education Centers (RECs) throughout the state.  The Cooperative Extension Service is administered by The University of Florida and Florida A&M University.

For growers — commercial operators and homeowners alike — of food crops and ornamental plants in the state, IFAS provides invaluable help.  But the functions of county extension offices don’t stop there.  For instance, families and consumers are served in the categories of aging and caregiving, children, food safety, health and nutrition, house and home, money matters, relationships, and workplace.

Richard Lyons’ Nursery recommends that you celebrate the upcoming 100th anniversary of the Cooperative Extension Service by checking out what IFAS has to offer.  Examine the website, http://solutionsforyourlife.ufl.edu/, and call IFAS offices in your county when you have specific questions.  The number in Miami-Dade County is (305) 248-3311, and the number in Broward County is (954) 357-5270.

We’re sure that your first New Year’s resolution for 2014 will be one you won’t regret.